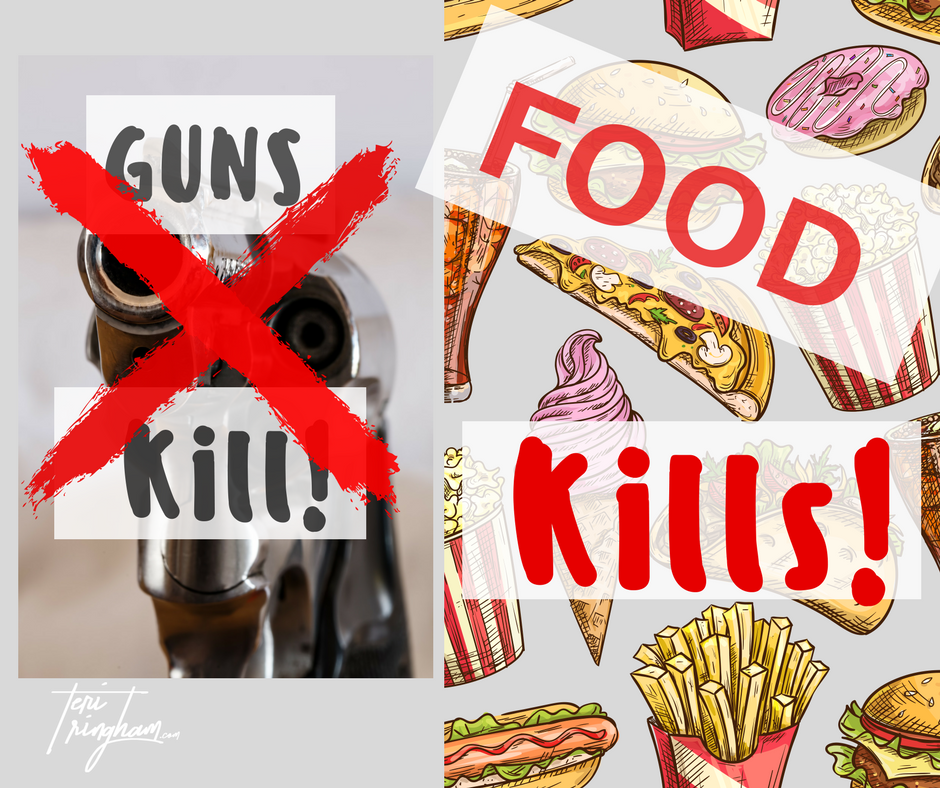 This post may contain affiliate links of products I recommend at no additional cost to you. Read about my affiliate policy here.

Does Gut health have an impact on mental health?  Should those campaigning for gun control be campaigning just as much for control of chemically treated and processed foods? While there may be sound reasoning to many regarding wanting background checks on people buying guns, there is tremendously more involved in mass shootings than controlling guns.

But that’s not really the discussion I’m after in this post.
More than gun control, let’s take a great big peek at WHY we have so many mental health issues today (btw…every mass shooter was on prescription mental health drugs).
While many find it hard to believe or minimize the potential for influence, diet/food absolutely influences mental health.
Living on carbs and sugar or genetically modiified food (egad!) decimates gut health.
There are over 100 million neurons in the digestive lining that interconnect, interact and communicate with the brain.Ultimately, the gut is telling the brain…I’m sick so you are sick.  https://teriringham.com/anxiety-gut-health-whats-connection/
If you don’t think this is true, you have two choices:
1) Keep on scrolling -or-

2) Do an internet search on gut health and brain health connection. Avoid the medical sites when you review the “hits” on this topic, because I guarantee you, the medical system has no clue in this connection when it comes to dealing with mental health issues such as anxiety and depression. Prescribing drugs they know really, really well. The human body interactions at the most basic level…not so much.

Whatever happened to common sense? Powerful forces with powerful influence…

However, Hippocrates, known as the great healer, most surely did. He was known as the great healer because he actually healed. Something unheard of in todays medical system. One of the biggest tragedies in our health system today is that his philosophy, teachings and experience went by the wayside the minute pharmaceutical companies entered the picture to begin their control of our medical system.

Foods Influence on the brain

If we don’t think diet influences brain health, why do diabetics get light headed and need to eat when they feel sluggish, words slurring and stumbling when they walk?
Answer, blood sugar imbalance. What influences blood sugar in the human body? A huge influence is the health of the pancreas and, of course, FOOD/diet.
If we eat sh*t, the human body literally has no choice but to react accordingly with the end result being a sick body AND mind. https://teriringham.com/anxiety-gut-health-whats-connection/
So let’s back up the bus a bit…yes, guns kill. But a much larger issue and concern is the American diet loaded with starches and sugar that inadvertently kill much, much more.

You are what you eat. Truer words were never spoken.

Stop the marches-start tuning in

Why don’t we see marches and placards demanding our government finally having the guts to stand up to the chemical companies, sugar industry and food companies to start producing real food? Because that is not in the best interest of the “forces that be” to influence the mass population, legislators and media.

When is food not food?

Go pull a box or bag of food out of your pantry or kitchen cabinet. It would be a big challenge find more than two (if there is even that-most likely not but I’m feeling generous) ingredients that actually have nutrition. Added synthetic vitamins don’t count.

White flour, sugar and a bunch of preservatives with added synthetic vitamins. That’s not food. That’s crap. Go pull a carrot out of a garden. That’s real food.

And then we wonder why our American population is obese with a high number of children and teenagers struggling with depression and anxiety.
Go ahead and march. Let the legislators put young children on televison lamenting society and the changes needed. None of these truly understand the key problem.
Let’s focus on where the real change needs to be: on a society that has allowed greed and influence take over our food and medical systems.
THAT’s when you will begin to see real change.
Everything else is pretty much smoke and mirrors from the very people controlling these industries.
Evil comes in many forms…
#drugskills #sugarkills
Tweet
Pin
Share336
336 Shares

There are no comments

JOIN ME AND GET ACCESS TO MY HEALTH TIPS!

Is Your Doctor Going to Heal You?

By accessing or using any page on TeriRingham.com, you agree that you have read, understood, and will abide by the:

Any/all of the links on TeriRingham.com are affiliate links from which I receive a small commission from sales of certain items. As an Amazon Associate, I earn from qualifying purchases. Thank you for your support!